In Down Real-Estate Market, Homeowners Are Deciding to Abandon Their Loan Obligations Even if They Can Afford the Payments

The Wall Street Journal posted an article entitled Debtor’s Delima: Pay the Mortgage or Walk Away

PHOENIX — Should I stay or should I go? That is the question more Americans are asking as the housing market continues to drag.

In good times, it would have been unthinkable to stop paying the mortgage. But for Derek Figg, a 30-year-old software engineer, it now seems like the best option.

Mr. Figg felt trapped in a home he bought two years ago in the Phoenix suburb of Tempe for $340,000. He still owes about $318,000 but figures the home’s value has dropped to $230,000 or less. After agonizing over the pros and cons, he decided recently to stop making loan payments, even though he can afford them.

Mr. Figg plans to rent an apartment nearby, saving about $700 a month. 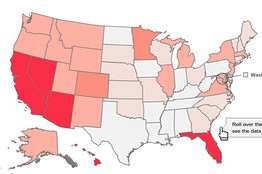 mortgage even though they could still afford to pay it.

A growing number of people in Arizona, California, Florida and Nevada, where home prices have plunged, are considering what is known as a “strategic default,” walking away from their mortgages not out of necessity but because they believe it is in their best financial interests.

A standard mortgage-loan document reads, “I promise to pay” the amount borrowed plus interest, and some people say that promise should remain good even if it is no longer convenient.

George Brenkert, a professor of business ethics at Georgetown University, says borrowers who can pay — and weren’t deceived by the lender about the nature of the loan — have a moral responsibility to keep paying. It would be disastrous for the economy if Americans concluded they were free to walk away from such commitments, he says.

Walking away isn’t risk-free. A foreclosure stays on a consumer’s credit record for seven years and can send a credit score (based on a scale of 300 to 850) plunging by as much as 160 points, according to Fair Isaac Corp., which provides tools for analyzing credit records. A lower credit score means auto and other loans are likely to come with much higher interest rates, and credit card issuers may charge more interest or refuse to issue a card.