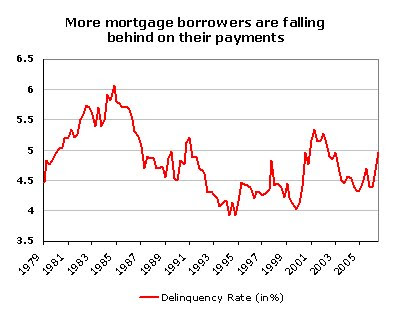 Among U.S. homeowners with mortgages, 7.91 percent were at least 30 days late on payments in November, up from 7.76 percent in October, according to the monthly data the credit bureau provided exclusively to Reuters on Wednesday.

Delinquencies are an indication of future consumer bankruptcy filings, according to Equifax.

“(Consumers) spend a lot more during November and December and they get behind and can’t get to their payments,” said Myra Hart, senior vice president of Analytical Services at Equifax.

No real improvement is possible until unemployment levels come down, she said in an interview.

“We are about at the peak in terms of delinquencies,” Hart said. “Things probably won’t improve dramatically until jobs begin to be added. Delinquencies will stay at this level and may improve by small levels but we won’t see any real improvement till 2011.”