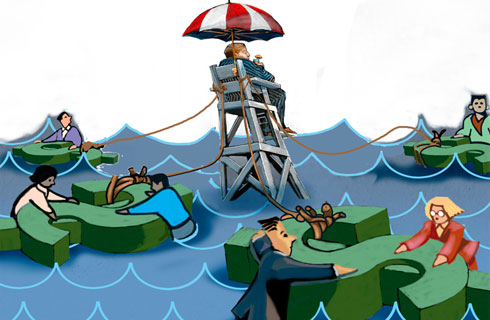 The ads are ubiquitous, and for consumers awash in debt, nearly impossible to ignore: Reduce your credit card bills 50%! Avoid bankruptcy! The relief is real!

Behind the ads is a fast-growing industry that barely existed a decade ago. Debt-settlement companies claim they can significantly reduce borrowers’ debts by negotiating directly with creditors. Unlike most businesses, these companies have flourished during the economic downturn.

But a growing group of lawmakers, regulators and consumer advocates say these companies exploit desperate borrowers, often leaving them deeper in debt. The Federal Trade Commission wants to restrict fees the companies charge. Sen. Charles Schumer, D-N.Y., has introduced legislation that would bar debt-settlement companies from collecting fees until a settlement has been reached. Last month, Oregon‘s attorney general reached a settlement with Credit Solutions of America, the USA’s largest debt-settlement firm, that bars the company from operating in that state for three years.

Now, the industry is fighting back.

the proposals would eliminate a legitimate option for consumers who can’t afford to fully repay debts and don’t want to file for bankruptcy.

mpanies act as a valuable intermediary between borrowers and lenders, says Don Goldberg, a Campaign spokesman. “If you take them away, you’re leaving consumers on their own.”